To run a business from home these days it essential to have a Broadband internet connection. The “always on” service, which means email will appear on your screen in a timely manner, and its speed are a long way removed from the dial up days. However, when you unpack your Broadband box from your ISP (or Router to give it its correct name) you will be presented with a multitude of cables sockets and lights. Richard Sparkes explains how to get set up

So first things first, why is it called a Router? In the simplest terms, because it routes information from the private computer network in your home or office to the public network that is the internet. However, these small boxes that most Internet Service Providers give away for free are actually very impressive. Not only do they allow you to connect computers and other devices together within your home/office, and route traffic out to and back in from the internet, they also provide the first line of defence against hackers and in some cases give you additional phone lines using Voice over IP (more on this in a later issue).

Getting back to how you can use the router; when you unpack your router you will connect it to the phone line. To do this you need to use a “Micro Filter”. This is a small box, usually white, that splits the in voice and internet parts of your phone line. You will need to use one of these Microfilters on each phone socket in your house that has a phone plugged into it, even though you use only one of the sockets for the Broadband box.

The Broadband Router can provide wired connections for several computers or other devices such as a printer or network hard disc. In addition most, if not all, modern routers have Wireless connectivity (WiFi).

On the back of the Router you will find a group of rectangular sockets, often yellow in colour. These Ethernet ports allow you to share your internet connect with all your computers and other devices using Ethernet cables. These can be bought in varying lengths from many shops but are often much cheaper on line.

Connecting it all up

The router should be plugged into the Microfilter using the supplied cable with the small square connectors (only use one Microfilter per wall socket). Computers can then be plugged into the Ethernet sockets on the back of the Router. Most Internet Service Providers supply their Routers ready configured with all the settings to allow them to connect to the internet. 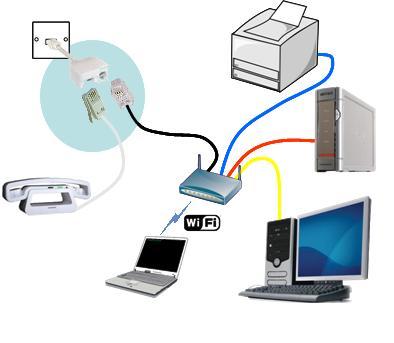 Your Router will now manage the private network within your home or office. This network will allow the connected computers and devices to talk to one another, but they should only be accessible to the outside world if you as a user allow access. This private network is often referred to as the LAN, Local Area Network. Conversely, the internet side of your Router is called the WAN, the Wide Area Network. These terms may be used by pointy headed technical types from time to time. All that really matters is that all messages sent between computers on your LAN and from computers on the LAN to the internet pass through the Router which decides how to handle them and which port to send them to.

When you power your router up the lights on the front will flash for a few minutes while it registers itself with the ISP and then connects to the internet. Once the lights have settled down and in most instances assumed a pleasant green glow you are connected to the internet.
In future articles we will look at how to set up your WiFi network and ensure it is as secure as possible, how to configure your network so you can share devices such as printers and hard disks, and how to trouble shoot problems when the internet just won’t work.

Richard Sparkes is a specialist in mobile telecommunications technology.

How to easily encrypt files on your Mac and Windows computer

Make images and text appear on click in PowerPoint

3 places you should be storing your data

Need to convert a video file?